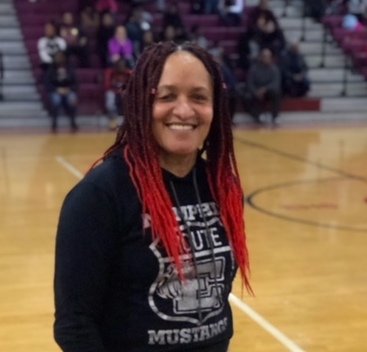 Melony Walker was born in Memphis, Tennessee January 28, 1964. She is a graduate of George Washington Carver High School, LeMoyne-Owen College and Strayer University. In 1982, on a basketball scholarship, she attended LeMoyne-Owen College where she received a B.A. in Fine Arts. She taught art education and coached girls’ basketball (2006 TSSAA State Champions), track and volleyball in Memphis City Schools for eleven years. In 2010, she received a master’s degree at Strayer University. In 1993, her work was honored by the Tennessee Black Caucus of Legislators at the Peabody Hotel. Much of her work is based on family, unity, sports, and Memphis culture through fine arts and wearable art. She was selected as the Africa in April Graphic artist from 2000 to 2006. She is known throughout Memphis of her Unique Style of work and the Artist for Retired NBA player Anfernee “Penny” Hardaway, NBA Chicago Cameron Payne, and creates work for SCIAA and SCSK12 Custom Paintings for Championship Awards. Melony Walker is branching out on her journey as an Artist by exploring her work Nationally and International as Women Artist. She current owns and operates Creative Di-Zign.